In this era doused with fleshy image, we need not be ashamed of our wordy heritage devoid of sensual media. Despite the destruction of synagogues and communities, confiscation from us (many times over) of vast gilded wealth and bonfires of book burnings, we have held on to our words. 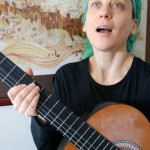 By some oversight, the rabbis did not forbid a woman’s voice on the written page. The loophole appears to have gone unnoticed and unutilized. Nehama Leibowitz was reportedly gagged from emitting her biblical writing for a couple of decades, but otherwise women have not been voluble enough to be the object of such injunctions. Moreover, what is to prevent a woman writing in a man’s name? There is a rumor that the poorly drafted parts of Rashi in the Talmud were written by his daughters. Perhaps half our scholarship was published under such ruses!

Voice of a Woman