Since I left the Joint Committee on Taxation to take care of my parents in Australia, people have sent me messages to say how lucky I am to be here in Sydney. It is true I am missing working on mark to market and that I am glad it hasn’t come into law because then there will be something to do when I come back.

But I didn’t want to write to you about that. I wanted to talk to you about America, now that I am far away. My great grandmother Mali was born in New York in the 1880s and she was gassed and incinerated at Auschwitz in 1944.

I came to New York as a child in the 1980s and fell in love with the city so much that I had to come back to live there in 1990, and it was even better than my dreams. Then I came to Washington in 2000 and found it a drama and a fairy tale altogether.

When people say to me, oh I wish I could come with you to Australia and get away from all this, I tell them that there is no getting away from America. There is not a segment of Earth that is not touched by America. Although Americans see themselves as diverse and riven, we who are far from you, like the astronauts seeing our planet from space, see a single light: the light of liberty.

When the Great Britannia ended up in the trenches of western Europe, America was there waiting, and it has led the world for one hundred years. When people talk about the passing of America to the next world power, I tell them: There is nowhere else to go.

Where America goes, all the world follows, not because America is flawless, but because the alternative is tyranny. The values we call human, of autonomy, of freedom, a place where discarded persons are welcomed and can flourish — that is America. I decline to accept the end of America because even when I live far away, I have nowhere else to go. None of us does.

When it is reported in the news that the United States is to shut down in a budget skirmish, my parents in Sydney worry as my forefathers trembled in Nazi-occupied Europe when Roosevelt died. We hang on to every one of your moves. We are counting on you.

And so I have a favor to ask you. Take care of America for me. You, who are its guardians. The discarded of the Earth have founded and led America’s greatest empires, but none of that could exist without a government of singular individuals who hold fast to the principles that the founders held to be inviolable. I trust you, the government, and people of America to watch over America for us, for yourselves, and for all the Earth.

This Letter to the Editor was originally published in Tax Notes in November of 2020.

We live together in coronavirus isolation in Sydney, Australia—my parents, my daughter and I. We are exceedingly busy doing absolutely nothing. Washing our hands again and again, then washing the towel that washed the hands. On the phone checking on people who are also in isolation.

My mother, who is in a high-risk category for the coronavirus, is participating in her board meetings on Zoom. My father, in an even higher risk category, is attending shiurim on Zoom. No one comes into the house, and we don’t go out except to places where there are no people. My daughter is in quarantine in her bedroom because she had been taking classes at a university campus where someone tested positive. We talk to her on the phone. She has the best Wifi in the house, so she’s set till Seder night.

In between my mother’s Zoom sessions and my father’s, I’m bleaching the kitchen before making Shabbos. Is bleach more poisonous than the virus? It’s an exceedingly hot day for a Sydney autumn, not autumn at all, and we’ve heard that the sun burns the virus. Last month, the sun burned Australia down; this month, it’s burning the virus down. That’s what they tell us and although I don’t believe the virus rumors, I still follow them, just in case. Doesn’t hurt to have the windows open and blankets scorched by the sun.

We are exceedingly busy doing absolutely nothing. Washing our hands again and again then washing the towel that washed the hands.

Midday has passed in Sydney, and the calls to my son and sister in the US will soon cease as they go to sleep, and then we will begin calling Europe and Israel before we light candles. The Jewish schools in Sydney have been canceled, and I can hear children shrieking with joy. Another summer vacation has arrived! I am relieved; they are at low risk for the virus. The older we are, the more we are at risk for the virus. The young ones, in their second summer vacation that might last a year, are safe.

This article was originally published at Jewish Action

In this era doused with fleshy image, we need not be ashamed of our wordy heritage devoid of sensual media. Despite the destruction of synagogues and communities, confiscation from us (many times over) of vast gilded wealth and bonfires of book burnings, we have held on to our words. Artful Jew
http://www.jpost.com/JewishWorld/Judaism/Article.aspx?id=197685

Are schools a must or an option?  Viva Hammer describes one family’s journey to Teaching Their Own.

Why are Orthodox Jews having so many children?  Did they always have so many? Viva Hammer’s groundbreaking article describes the new phenomenon Jewish action final

Men’s prayer comes together so naturally, so effortlessly.  Every day, twice a day, a boy waits for his moment, while his sister waits at home. Creating a prayer service of girls, who have spent their lives waiting at home, never having apprenticed or even mingled with the performers, is like conducting a symphony with an orchestra of nursery children. You might lose a few notes. 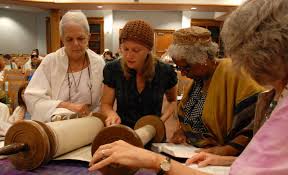